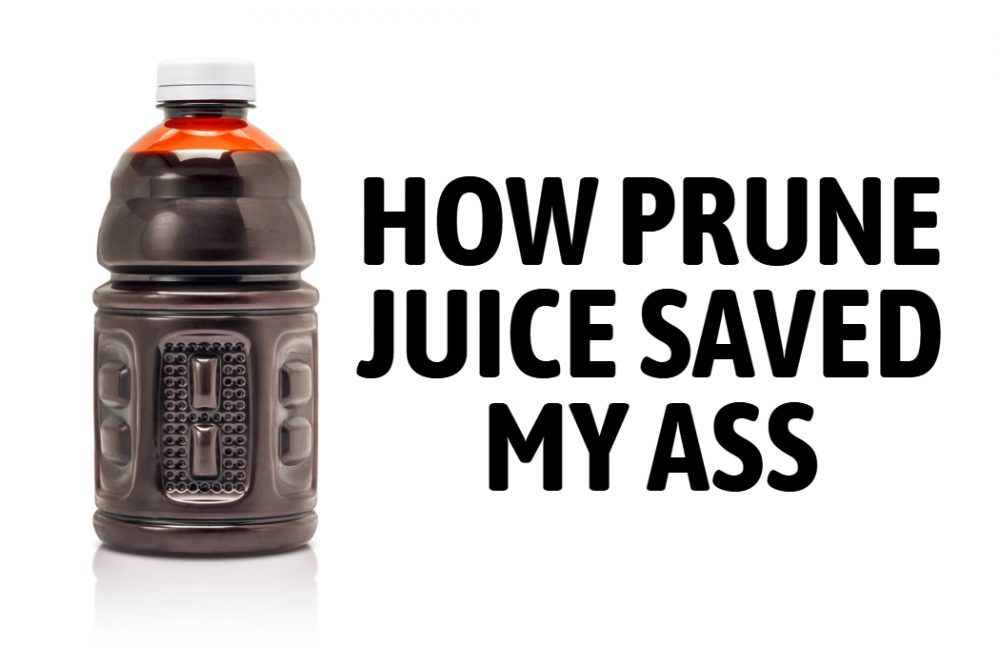 How Prune Juice Saved My Ass

I’ve been wanting to talk about how prune juice saved my ass for a few years now.

But every time I would think about it, I would realize that talking about the awesome power of prune juice would mean that I would have to talk about my bowel movements. (That means pooping.)

I write a lot about my addiction and mental health issues, so why is it still so hard to talk about pooping?

Sure it’s gross and it smells, but everybody does it. So why don’t we talk about it?

And if I was a person who was having trouble in that department, as many people do, I would want more people to write about simple solutions to my trouble.

The Trouble With Bowels

I used to have a lot of trouble going #2.

Often there would be bleeding.

One of the causes of bleeding is hard stool.

A few years ago, the bleeding and fissures got really bad and I started to worry. I tried changing what I ate, and it didn’t seem to make a difference.

The internet told me that I might need medication or even surgery. This was all very upsetting.

So I went in to see the gastroenterologist and after he examined me he said two words:

I was to drink 4 ounces of prune juice every day and report back in 2 weeks.

No medication. No surgery. Just prunes.

But actually he was very clear that eating prunes wouldn’t do the trick.

It had to be prune juice.

Something about the liquid form that makes it effective.

I was a bit skeptical but I bought some prune juice and every morning for 2 weeks I took 2 shots of the brown liquid.

It’s like if you put a bunch of raisins in a blender with some water. Like a mincemeat pie smoothie.

And guess what. It worked.

No more hard stool. Eventually the fissures healed up and stayed that way.

And the solution was so simple: prune juice.

And every day I have my 2 shots of magical mediocre brown liquid.

I don’t love it but I’m used to it now so it’s really not so bad.

And I’ve learned that if I stop, even for a day, the hard stool starts to come back. It’s just the way I’m built, I guess.

So whenever I travel, the first thing I do is find prune juice.

Sometimes I have to buy a huge bottle because that’s all they have, but I don’t care.

The alternative is not something I’m looking to experience again.

I want everyone to have the opportunity to escape from a life of uncomfortable bowel movements, so I’m glad I decided to put aside whatever hangups I had about writing about this topic.

We shouldn’t be afraid to talk about things if talking about them might help others.

So, in conclusion…I love you prune juice!

And now a word from Grains:

According to Beans, prune juice is the one and only magical food to relieve all of your constipation woes. And while I admire his fervour, as a health professional I must point out that there are many foods that can help.

Sorbitol, a sugar alcohol with a laxative effect, is the secret sauce that makes prune juice such a great mover and shaker. However, it’s not the only juice with sorbitol, you might also consider apple juice, or, better yet, pear juice.

Dietary fibre helps to add bulk to stool and draw water into the colon, making it easier for things to move along in a more comfortable way. What foods contain dietary fibre… why, just two of my favourites: grains and beans!

But that’s not all, here’s a list of some foods you might consider if you want to up your fibre intake:

Beans
In his early 20s, Beans learned to bake pie from scratch so that he wouldn't have to spend all of his money on pastries.

Latest posts by Beans (see all)
Thanks for subscribing!
Eating Well
Posted on March 5, 2019