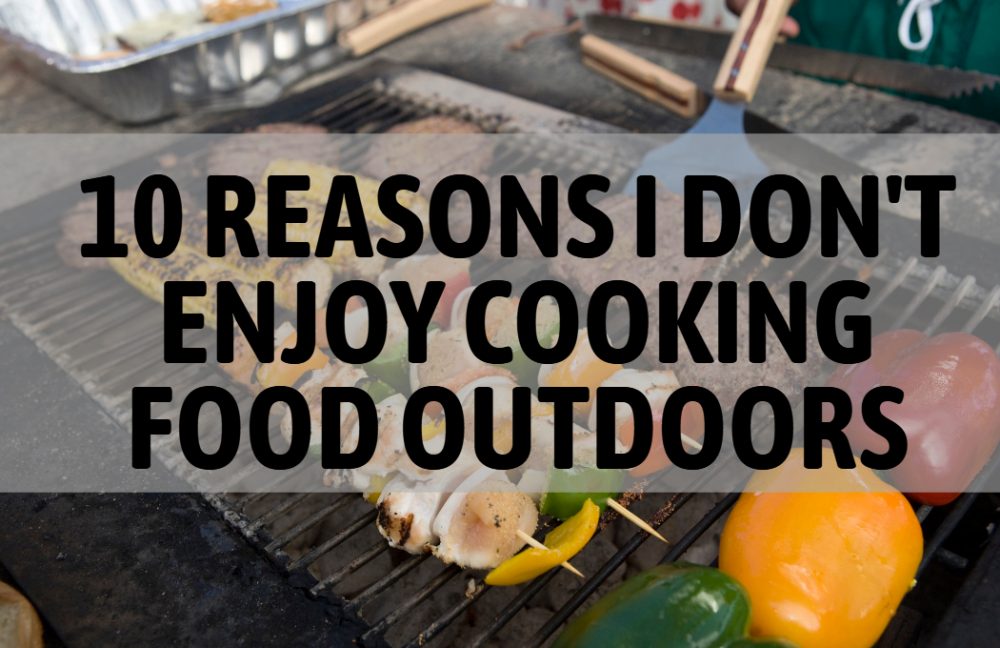 That’s right, I said it. I don’t enjoy cooking food outdoors. On a grill. On a stick. Whatever other way you can think of, I don’t like it.

I enjoy eating food cooked outdoors. I’m not a monster.

It has taken me a long time to accept this and not think there is something wrong with me.

According to this article (What is Barbecue?), everyone calls “outdoor cooking” something different. BBQ, bar-b-q, barbeque (that’s the autocorrected choice), grilling. I’m just going to use them all interchangeably because they are all some variation of cooking outdoors with fire.

THE BUSINESS OF BBQ IS HUGE.

As soon as it is nice enough to stand outside for longer than 5 minutes, everybody wants to cook outside.

I get it. It tastes great. It smells great. There’s something nice about a backyard BBQ. Feels like summer.

I love a hamburger cooked on the grill.

I just don’t want to be the one grilling.

SO WHAT’S YOUR PROBLEM? WHY DO YOU HATE SUMMER?

I was thinking about why I don’t like the outdoor cooking experience and I came up with 10 things:

1. I’m allergic to smoke and many things outdoors, like grass and trees and pollen.

But that hasn’t stopped me from learning to enjoy camping and running and spending time outdoors. Sure, this is probably why I never got into outdoor cooking early on, but it’s only part of the story.

Fire is unpredictable. Sure there are knobs to control the amount of gas and the flame level but those only do so much. Fire reacts to changes in the wind, and food particles (see #6 below). In my kitchen, there is a pot or pan in between the food and the heat source. And honestly, I’ve never been a big fan of gas stoves either. I just don’t like the unpredictability of fire. Ever run out of matches or had an igniter go out when trying to light an electric stove? Trick question.

When I’m done cooking meat in a pan on the stove top, I let the pan cool down and then I wash it with soap and water. I’m pretty happy with this system. So now I find out that this is the generally accepted cleaning schedule for a BBQ And really cleaning it is a laborious task.

Bugs in my face. Bugs in my food. Spiders in the gas pipes. Outside = bugs.

5. That little cup of fat that hangs out the back.

Gross. And how did that fat get there? That’s right, it slid down the BBQ through a hole. See #3.

Ever try to cook chicken on an outdoor grill? I just found this article online: 8 Mistakes you’re making when grilling chicken https://www.thisisinsider.com/best-ways-to-cook-chicken-2018-5 The fact that this article even exists means that cooking chicken on a grill is a huge pain in the ass. I can broil chicken in the oven on a pan in 8 minutes. It comes out great every time.

Ok, maybe I’m unlucky. Maybe I don’t have the most expensive BBQ. But what I do know is that on 2 separate occasions I was cooking sausages on the grill and the whole thing burst into flames. I’ve cooked a lot with an oven and I’m proud to say that not once has my oven ever burst into flames.

My kitchen works in all seasons. Snow, rain, all good.

9. I assembled my outdoor grill.

You’d think that would help right? Instead I’m just more aware of how poorly constructed it is and of the possibility of random explosions.

This is likely my main issue. If I would have grown up grilling, it would seem normal to me. But I don’t think we even had an outdoor grill until I was in my teens. And even then, I grew up in a place where the winter is long and when it’s warm enough to grill….see #4.

But the truth is, my brother loves to grill outdoors, and he grew up in the same place as I did, so apparently my environment had nothing to do with it.

And that’s ok because there are a lot of ways to live in this world.

So all I ask is when someone says they don’t like sports or music or movies or anything that you think is universally liked by everyone you know (like BBQ), just accept them as they are and ask them what they would like on their hamburger.